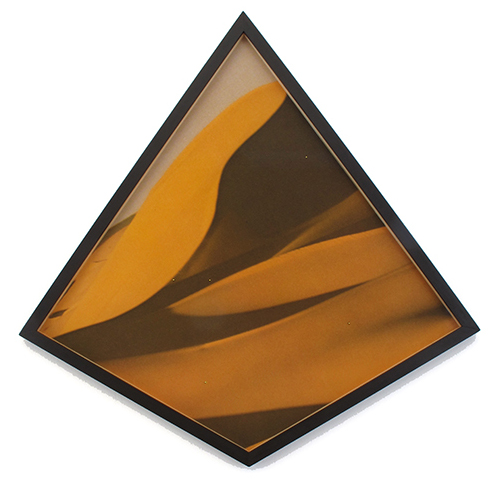 Kunsthall Oslo is pleased to present the exhibition Whileaway, curated in collaboration with Vanessa Ohlraun, with new and recent works by Azar Alsharif, Maiken Bent, Lili Reynaud-Dewar and Marnie Slater.

Whileaway is the name of an imagined utopian world in Joanna Russ’s 1975 book ‘The Female Man’. In Russ’s feminist sci-fi novel of time-travel and cultural collision four characters from parallel versions of Earth find themselves brought together by the events of a war in the distant future.

These four – Jeannine, Joanne, Janet and Jael – are in some sense the same person, but formed by radically different cultural environments, from the Great Depression of the 1930s to the future utopia of Whileaway.

The exhibition Whileaway brings together work by four artists who engage in very different ways with the material and mythologies of contemporary culture.

Azar Alsharif works primarily with found images, but her practice is equally informed by poetry and the subversions of the cut-up technique. Alsharif finds a provisional, almost surrealist idea of beauty in the fragmentation of the everyday image world. Alsharif was born in Iran in 1984 and lives and works in Bergen. She graduated from Bergen National Academy of the Arts in 2011, and has had one-person exhibitions at Entrée, Bergen (2013) and Rom 8, Bergen (2012). Her next project opens at Galleri Blunk, Trondheim, in May.

Maiken Bent’s sculptures offer an excess of possible meanings and uses, an overlay of function, ritual aesthetics and repressed desire. Combining pre-industrial craft with mass-manufactured materials, they remind us that the abstract power structures of modernity rest on the primitive ability to restrain the human body. Bent was born in Denmark in 1980 and lives and works in Copenhagen. She graduated from The Royal Danish Academy of Fine Arts in 2006, and her recent exhibitions include the solo shows Transatlantique at New Galerie, Paris (2013) and Overseas Cargo Club at IMO, Copenhagen (2012).

Lili Reynaud-Dewar’s work explores the problems and possibilities of her ‘illegitimate’ identification with cultures outside the parameters of her own upbringing. For the installation ‘I Don’t Know What a Conceptual Artist Looks Like’ (2012), first exhibited at the Generali Foundation, her starting point is the rumoured attempt of the architect Le Corbusier to seduce the singer and dancer Josephine Baker by blacking up and performing his own version of her act. Reynaud-Dewar was born in France in 1975 and lives and works in Paris. She studied at Glasgow School of Art and the École Régionale de Beaux Arts de Nantes, and her recent exhibitions include solo shows at Le Consortium, Dijon (2013), Karma International, Zurich and Magasin, Grenoble (2012).

Marnie Slater’s works are primarily about the difference between individual and social experience, and particularly about the way that social experience depends on a public consensus about the meaning of images, objects, or texts. Or, to put it another way, Marnie Slater’s modest interventions demand nothing more than that you change your worldview to accept them. Slater was born in New Zealand in 1980 and lives and works in Antwerp. She graduated from the Piet Zwart Institute, Rotterdam in 2010, and her recent projects include the performance Tonight I Am Everything Else Which Is Dancing at Witte de With, Rotterdam (2013), the installation Watermarking (with David Bennewith and William Hsu) at the Liverpool Biennial (2012) and the artists’ book So Gay! (with Liz Allan, Clare Noonan and Rachel O’Neill, 2012).

This exhibition is a curatorial collaboration with Vanessa Ohlraun, Dean of the Oslo National Academy of the Arts. Ohlraun studied Art History, Cultural Anthropology and Gender Studies in Freiburg, Seattle and Berlin. Previous to her appointment to the academy in Oslo, she was Course Director of the Master of Fine Art program at the Piet Zwart Institute in Rotterdam.