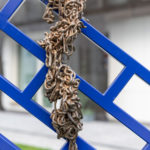 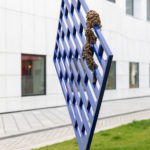 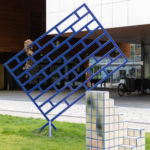 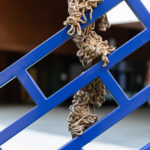 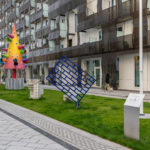 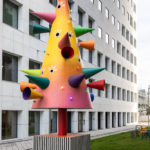 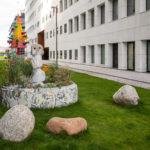 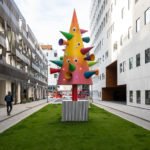 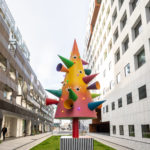 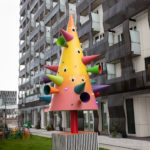 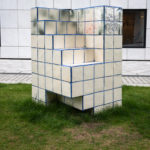 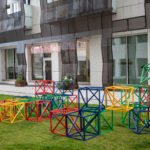 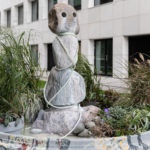 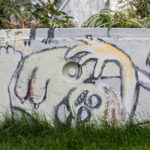 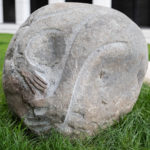 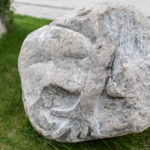 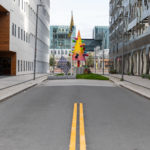 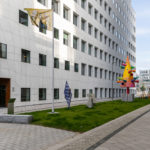 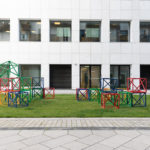 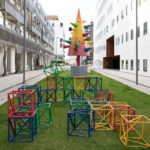 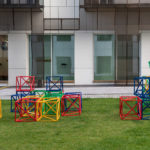 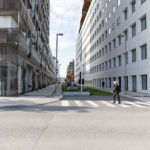 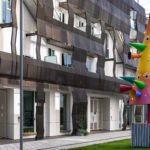 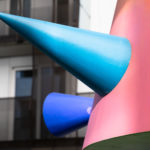 Please join us on Friday June 28th 2019 3–6pm for the official opening with refreshments and music.

For summer 2019 the street outside Kunsthall Oslo will be covered in grass and turned into a sculpture park, with artworks by Rasheed Araeen, Fredrik Berberg, Jennie Hagevik Bringaker and Joanne Tatham & Tom O’Sullivan.

About the works and the artists:
Zero to Infinity is a large interactive sculpture by Rasheed Araeen which consists of thirty-six painted wooden open-framework lattice cubes. Each time the work is displayed, the cubes are initially positioned in an ordered structure, but the artist’s intention is for viewers to interact with its components by moving them into new configurations. Araeen is a Karachi born, London-based conceptual artist, sculptor, painter, writer, and curator. Araeen’s work has been shown in solo and group exhibitions, including a recent retrospective at the Van Abbemuseum, Eindhoven; the 57th Venice Biennale; documenta 14, Athens; Zero to Infinity, Tate Modern and the 2012 Gwangju Biennale.

Oslo based artist Fredrik Berberg has made three new sculptures especially for the Rostockgata Sculpture Park. Berberg (born 1986, Skien) studied at the Bergen Art Academy; he creates his sculptures with the kind of 3D modelling software used by architects and industrial designers, and then attempts to realise them as physical objects, emphasising the compromises and discontinuities this transition creates. Berberg has exhibited widely around Norway, including at Telemark Kunstsenter; Lynx, Oslo; Elephant Kunsthall, Lillehammer; NoPlace, Oslo and Palmera, Bergen.

Jennie Hagevik Bringaker’s Stabel takes the form of a fountain, a stone-carved figure with several faces that cries gently into a pool of water. Bringaker is a visual artist and scenographer educated at the Academy of Performing Arts and New York University. Her work is rooted in performance and sculpture and she has produced many performances and exhibitions, both solo and as part of the collaborative duo Trollkrem. Recent exhibitions include projects at the Norwegian Sculpture Biennale and the Ekeberg Sculpture Park. An earlier form of the work Stabel was exhibited at the Norsk Billedhoggerforening.

Joanne Tatham and Tom O’Sullivan’s tree sculpture Does the Iterative Stick talks and sings, reflecting on its own existence as a work of public art. Tatham and O’Sullivan will also present three photographs of public sculptures by the Norwegian artist Nico Widerberg. Tatham and O’Sullivan have worked collaboratively since 1995. They represented Scotland at the Venice Biennale in 2005 and their work is represented in many public and private collections, including the Tate Gallery, London and the Museum of Modern Art, New York. Does the Iterative Stick was commissioned by The Kings Cross Project and first installed in Granary Square, London in 2017.

The flag production workshop for children and young people at Tøyen Biblo was initiated by Kunsthall Oslo and run by artist Einar Goksøyr Åsen.

Inspired by Bonnie Sherk’s 1970s Portable Parks in San Francisco, the Rostockgata Sculpture Park is part of How The Universe Works, Kunsthall Oslo’s year of projects for children and adults. Up until the late 20th century, children from the surrounding tenements played in the streets, backyards and waste ground around Rostockergata in Bjørvika—now redeveloped and renamed as Rostockgata, the current site of Kunsthall Oslo. The Bjørvika/Bispevika area will house almost 10,000 people when the latest round of building is completed, but the outdoor play facilities mandated by the City of Oslo are still to be realised.

Past event, Past exhibition