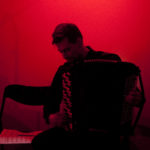 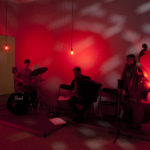 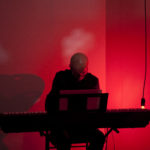 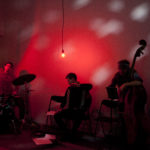 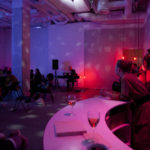 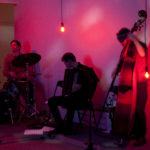 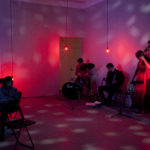 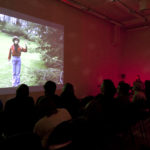 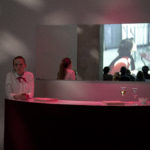 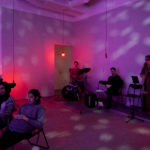 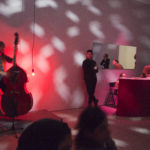 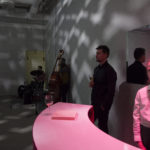 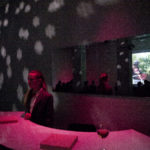 8.-11. februar/8-11th February 2018
With moving images now consumed in more scattered and solitary ways than ever, what does the commitment to come together physically to watch them still mean? Sad Disco Fantasia is a festival of film-as-event, across four days and three venues (Kunsthall Oslo, Kunstnernes Hus kino and Cinemateket), that aims to rediscover the value of collective viewing. It features the work of a variety of Scandinavian and international artists, and ‘screenings’ ranging from a ritual invocation to a cinematic dancehall, from intimate conversation to 3D spectacle.

Programme:
All events Kunsthall Oslo events are free and refreshments will be served.
The Dream That Kicks: tickets kr80/50 from Cinemateket.
Kunstnernes Hus: tickets kr80 on the door.

Torsdag 8. februar/Thursday 8th February
Kunsthall Oslo Rostockgata 2–4
kl. 20
Water from the Waist Down – Gaia Fugazza, Marie Kølbæk Iversen & Diana Policarpo, 2018
A ritualistic event combining the film work Star Messenger by Marie Kølbæk Iversen with a percussion performance by Diana Policarpo and Other Ways, a series of sculptures by Gaia Fugazza which are to be held in the audience’s mouths.

Fredag 9. februar/Friday 9th February
Kunsthall Oslo Rostockgata 2–4
kl. 10–17
Spøkelsene av permanens/The Phantoms of Permanence – a workshop for eccentric film criticism, led by Susanne Christensen & Mike Sperlinger (Norsk & English).
A workshop for aspiring writers to experiment with subjective forms of film criticism. The resulting texts will be printed in chapbook format, and also published by the film magazine Wuxia. You must sign up for the workshop in advance – if you are interested in taking part, please send an email to mikesper@khio.no by Monday 5th February.

Lørdag 10. februar/Saturday 10th February
Kunsthall Oslo Rostockgata 2–4
kl. 19
Forty Days at the Rhumba – Mark Aerial Waller
A special edition of UK artist Mark Aerial Waller‘s legendary Wayward Canon project, featuring elements of Duelle by Jacques Rivette (1976) and Rabbit’s Moon by Kenneth Anger (1950/72). A classic French feature film is revisited in expanded form, its fictional spaces spilling out into Kunsthall Oslo, blurring the boundaries between cinema, gallery and dancehall. My dear friend, Your light footfalls at yesterday’s dance reminded me to ask; perhaps we could inhabit the glow at the end of cinema, even briefly, at the Rhumba, with Jacques Rivette and Kenneth Anger? The spirits can encroach upon and transform reality there, and we can enjoy a drink, and dance again.

Søndag 11. februar/Sunday 11th February
Kunsthall Oslo Rostockgata 2–4
kl. 14–16
Funding and producing artists’ films – talk and public discussion
With Lisbon-based film producer Anže Peršin (director of Stenar Projects) and an open discussion on artists’ film production and funding, moderated by Itonje Søimer Guttormsen and Mike Sperlinger (Norsk & English). What kinds of structures or support – whether formal or informal, financial or critical – are most needed in Norway to support artists’ film production? We hope to build on some recent discussions at Kunstnernes Hus and Nordland kunst og filmfagskole to explore some of the possibilities in an Oslo context.

Cinemateket Oslo Dronningens gate 16
kl. 18.00
X, Y and Z: Three Dimensions of Dialogue
A one-off 3D spectacular! A special edition of Greg Pope’s monthly Cinemateket event The Dream That Kicks presenting two recent films in which artists explore the outer limits of digital 3D technology. Sebastian Buerkner will introduce his film Chimera of M (2013), which uses stereoscopic digital animation to create a hallucinatory, fragmentary drama. The film’s 3D plunges us headlong into a world of shimmering translucent layers, in which we are never sure about the boundaries of either objects or relationships. By contrast, Blake William’s highly acclaimed Prototype (2017) draws on a range of real footage – images from the 1900 Galveston Hurricane, footage of a rodeo – and gradually propels them towards an extraordinary, stereoscopic pitch of 3D abstraction.

Sad Disco Fantasia has been commissioned by Kunsthall Oslo and developed by Mike Sperlinger, Professor of theory and writing at the Oslo National Academy of the Arts. Sad Disco Fantasia is funded by Kulturrådet/the Arts Council Norway. The artist’s portrait series at Kunstnernes hus is supported by the Fritt Ord foundation.