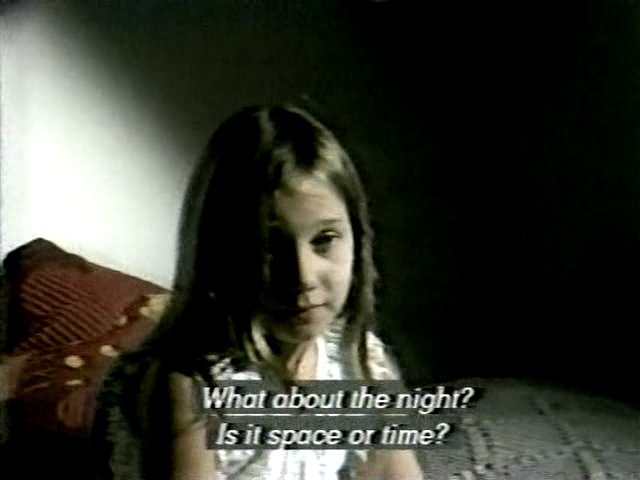 “This complex, intimately scaled study of the effect of television on the French family is constructed around Godard’s interviews with a school girl and school boy, Camille and Arnaud. Godard’s provocative questions to the children range from the philosophical (“Do you think you have an existence?”) to the social (“What does revolution mean to you?”).

The programs’ symmetrical structure alternates between Camille’s and Arnaud’s segments (or “movements”), each of which is labeled with on-screen titles: Obscur/Chimie is paired with Lumiere/Physique; Réalitie/Logique with Réve/Morale; Violence/Grammaire with Désordre/Calcul. … As they expose how a child’s world is “programmed” by the institutions of family and television, Godard and Miéville posit the mass media as the pervasive cultural influence in the home, with television as the 20th century primer. A provocative social discourse that resonates with eloquence and wit, France/tour/détour/deux enfants is an extraordinary achievement.”