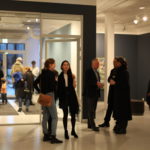 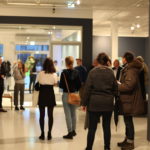 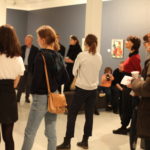 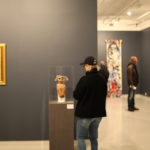 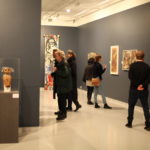 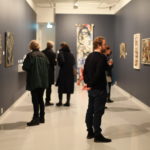 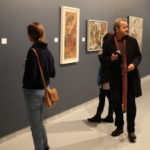 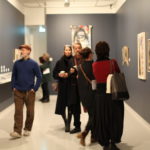 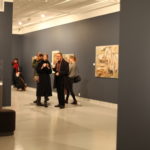 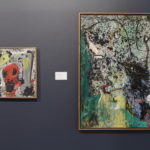 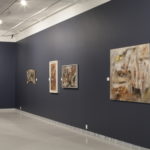 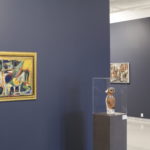 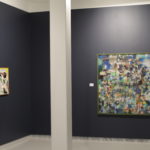 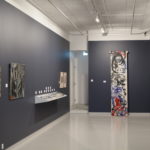 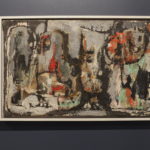 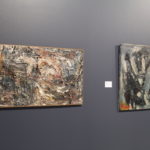 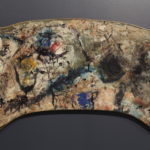 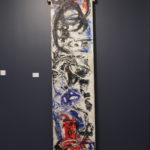 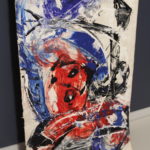 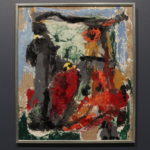 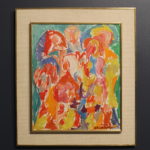 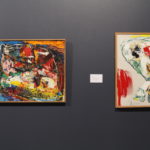 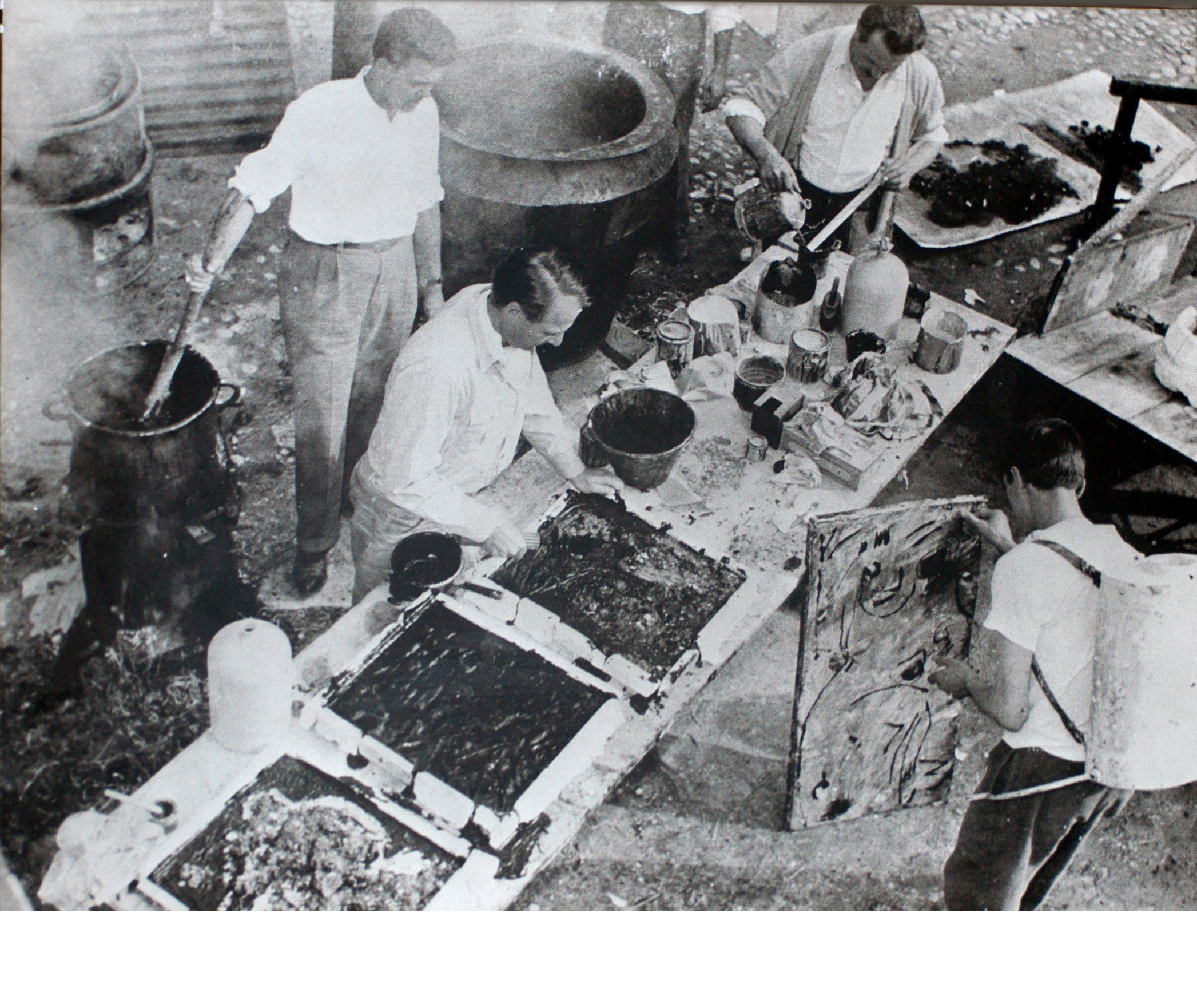 The International Movement for an Imaginist Bauhaus involved some of Europe’s most celebrated modern artists, and was key to the development of radical art in Europe. This exhibition brings together important but rarely-seen works by this short-lived group, whose influence on the development of art is still felt today.

The IMIB was first proposed by the Danish artist Asger Jorn in 1953, officially founded in 1955, and dissolved late in 1957, when it merged with the Lettrist International to form the Situationist International. The Movement was founded as a laboratory to explore the role of art in a modern, industrial society – its ideals were freedom and experimentation and, though it lasted only a few short years, its influence was profound. The group was international but based its operations in Alba in Northern Italy, when Jorn was invited there by the Nuclearists Baj and Dangelo. Asger Jorn produced his major monumental work, the Aarhus relief, in Alba (and transported it by train from Italy to Denmark). The Dutch artist Constant first developed his radical ideas about architecture as part of the Movement – ideas which continue to inform and inspire contemporary architects around the world. The legendary Italian artist Lucio Fontana was involved, as were many of the former CoBrA painters including Alechinsky, Appel and Corneille, and the Chilean surrealist Roberto Matta. Giuseppe Pinot-Gallizio was a central figure. He invented Industrial Painting at his Experimental Laboratory in Alba, which was also the Movement’s effective base – and the idea of Industrial Painting has influenced countless contemporary artists from Andy Warhol through to the young Norwegian painter Fredrik Værslev. Gallizio also collaborated with the Austrian artist Soshana Afroyim, who signed herself simply Soshana. Ettore Sottsass was also a member of the IMIB at the very start of his career, before he found fame in his own right as a ceramicist and industrial designer.

The original Bauhaus school of art and design was founded by Walter Gropius in Weimar in 1919. The school moved to Dessau in 1925 and Berlin in 1932, but was finally closed, due to Nazi opposition to its radical ideas, in 1933. In 1953, Asger Jorn heard that the Swiss architect Max Bill planned to open a ‘new Bauhaus’ in Ulm. Jorn wrote enthusiastically to Bill, hoping to be part of the new project, but Bill informed him that the new school was strictly devoted to design – there would be no place for ‘free artists’. Jorn responded by proposing the International Movement for an Imaginist Bauhaus – a movement of ‘free artists’ devoted to the experimental theory and practice that would be excluded from the school in Ulm. Jorn, Gallizio and Piero Simondo declared the foundation of an Experimental Laboratory in Alba in 1955, and in 1956 they organised the First World Congress of Free Artists at Alba town hall. Simondo, along with Elena Verrone, also published a journal called Eristica devoted to the new movement and its ideas.

While this exhibition concentrates on painting – and so does not do justice to the many important experiments in ceramics that the group undertook – it does attempt to underline the open, collaborative nature of the project. If Jorn and Gallizio were the central figures, here we see them making works in collaboration with Baj, Simondo, and Soshana, and also working together. At one point they took a historical painting, which had been shaped to hang over a doorway in Gallizio’s home, and painted over it together; this method of painting on found canvases became a signature technique of Jorn’s, and was widely influential. The IMIB merged with another avant-garde group, the Lettrist International, in 1957, to form the Situationist International, but many of its members also went on to become internationally acclaimed artists in their own right.

You can find more information and links to archive material here.

The Munchmuseet on the Move/Kunsthall Oslo project is based in the legacy of the Norwegian art collector Rolf Stenersen. Stenersen acquired several works by Jorn, Alechinsky, Appel, Corneille and Matta, some of which appear in this exhibition thanks to generous loans from KODE, Bergen Art Museum. We are very grateful to the many other lenders who have made this presentation possible, including the Museum Jorn, Silkeborg; Archivio Gallizio, Turin; Museo Casa Mollino, Turin; and Amos Schueller, Vienna. The Imaginist Bauhaus is curated by Kunsthall Oslo with the generous assistance of Lucas Haberkorn, Liliana Dematteis, Francesca Comisso, Fulvio and Napoleone, Amos Schueller, and Frode Sandvik. This exhibition is supported by Nordic Culture Point and the Nordic Culture Fund.

Asger Jorn – Notes on the Formation of an Imaginist Bauhaus, 1957

What was the Bauhaus?
The Bauhaus was an answer to the question: What kind of “education” do artists need in order to take their place in the machine age?

How was the Bauhaus idea implemented?
It was implemented with a “school” in Germany, first at Weimar, then at Dessau. Founded in 1919 by the architect Walter Gropius, it was destroyed by the Nazis in 1933.

What is the International Movement for an Imaginist Bauhaus?
It is the answer to the question where and how to find a justified place for artists in the machine age. This answer demonstrates that the education carried out by the old Bauhaus was mistaken.

How has the idea of an International Movement for an Imaginist Bauhaus been implemented?
The Movement was founded in Switzerland in 1953 as a tendency aimed at forming a united organization capable of promoting an integral revolutionary cultural approach. In 1954 the experience of the Albissola gathering demonstrated that experimental artists must get hold of industrial means and subject them to their own nonutilitarian ends. In 1955 an imaginist laboratory was founded at Alba. Conclusion of the Albissola experience: complete inflationary devaluation of modern values of decoration (cf. ceramics produced by children). In 1956 the Alba Congress dialectically defined unitary urbanism. In 1957 the Movement is promulgating the watchword of psychogeographical action.

What we want
We want the same economic and practical means and possibilities that are already at the disposal of scientific research, of whose momentous results everyone is aware.

Artistic research is identical to “human science,” which for us means “concerned” science, not purely historical science. This research should be carried out by artists with the assistance of scientists.

The first institute ever formed for this purpose is the experimental laboratory for free artistic research founded 29 September 1955 at Alba. This type of laboratory is not an instructional institution; it simply offers new possibilities for artistic experimentation.

The leaders of the old Bauhaus were great masters with exceptional talents, but they were poor teachers. The students’ works were only pious imitations of their masters. The real influence of the latter was indirect, by force of example: Ruskin on Van de Velde, Van de Velde on Gropius.

This is not at all a criticism, it is simply a recognition of reality, from which the following conclusions may be drawn: The direct transfer of artistic gifts is impossible; artistic adaptation takes place through a series of contradictory phases: Shock — Wonder — Imitation — Rejection — Experimentation — Possession.

None of these phases can be avoided, though they need not all be gone through by any one individual.

Our practical conclusion is the following: We are abandoning all efforts at pedagogical action and moving toward experimental activity.