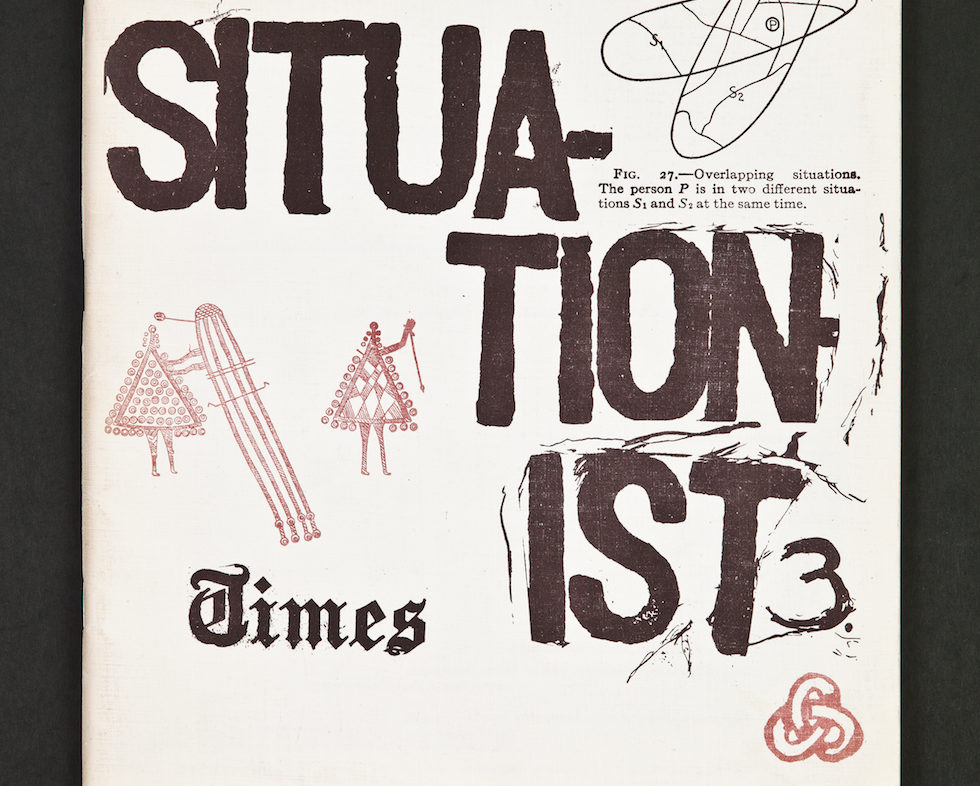 These Are Situationist Times: A symposium on topology, culture and politics

The symposium is now fully booked

Attendance is free and open to all, but advance registration is required by email to:

The Situationist Times (1962–1967) was one of the more exciting and explorative magazines to come out of the political and cultural turmoil of the 1960s. Edited and published by the Dutch artist Jacqueline de Jong (with the pataphysician Noël Arnaud as her co-editor on the first two issues), The Situationist Times was a strange and heretical creation: the international, multilingual journal of a movement from which de Jong had already been expelled.

This symposium inaugurates a research, exhibition, digitization and publication project devoted to The Situationist Times (ST), focusing in particular on the magazine’s engagement with the mathematical field of topology. De Jong’s partner, the Danish artist Asger Jorn, had introduced topological notions in issue #5 of the Internationale Situationniste (the organ of the Situationist International) in 1960, but a situationist topology was never fully developed there. For The Situationist Times de Jong assembled and collated hundreds of found images: labyrinths, rings, weavings, chains. Topological models were, at least in part, the impetus for this endeavor and de Jong and Arnaud also invited the pataphysician and mathematician Max Bucaille to contribute a series of playful and introductory texts on the subject. These experiments come across as particularly pertinent today when, according to some commentators, we are witnessing a “topological turn” in society.

A peculiar notion of constancy through change and deformation is key here. If mathematical topology traditionally is concerned with those properties of space that are preserved under continuous deformation (such as stretching and bending, but not tearing or gluing), the anti-copyright stance of The Situationist Times may be seen as part of a “topological” approach to the transformative dissemination of cultural forms: “All reproduction, deformation, modification, derivation and transformation of the Situationist Times is permitted”.

The symposium takes a dual point of departure: the particularities of the “cultural topologies” of the ST, and the hypothesis, recently put forward by Tiziana Terranova and others, that today culture itself is becoming topological.*

What does it mean for a culture to become topological? Can we trace genealogies of contemporary network culture back to the situationists? Or take the ST as a point of departure for outlining a political topology of contemporary art? How do the topologies of the ST relate to the ubiquitous data structures of our contemporary digital reality?

The symposium requires no background in mathematical topology, but an interest in the mixing of practices and fields of knowledge and creation could be useful.

These are Situationist Times is an exhibition, digitization and publication project by Elin Maria Olaussen & Karen Christine Tandberg (Torpedo Press) and Ellef Prestsæter, generously supported by the Norwegian Arts Council.

Speakers
Eric C. H. de Bruyn is chair of the graduate program of Film and Photographic Studies at the University of Leiden. He is an editor of Grey Room and is currently writing the book Mazes, Loops, Folds: A Political Topology of Contemporary Art. His writings on contemporary art and media have appeared, among other places, in Artforum, Art Journal, Grey Room and Texte zur Kunst. https://ericdebruyn.wordpress.com

Matthew Fuller is the author of the forthcoming, How to Sleep, in art, biology and culture, (Bloomsbury, Autumn 2017) and How to be a Geek, essays on the culture of software (Polity, Spring 2017).  Other titles include Media Ecologies, materialist energies in art and technoculture (MIT) and, with Andrew Goffey, Evil Media (MIT). He is Professor of Cultural Studies and Director of the Centre for Cultural Studies, Goldsmiths, University of London.  He is co-editor of the journal Computational Culture  and is involved in a number of projects in art, media and software.

Axel Heil is an artist, writer and curator. He has studied painting in Karlsruhe, Paris and The Hague, and ethnology in Heidelberg and Berlin. Since 2001 he is professor for “Experimental Transfers” at the Staatliche Akademie der Bildenden Künste in Karlsruhe. In 2016 he curated together with Roberto Ohrt the exhibitions Asger Jorn – the Open Hide (Petzel, New York) and Aby Warburg – Mnemosyne Bilderatlas at ZKM | Center for Art and Media, Karlsruhe, which will be presented at the Warburg Institute, London, in 2017.

Jacqueline de Jong is an artist living and working in Holland and France. She has exhibited widely since the 1960s, most recently at UMCA in Amherst (Human Animals), at ChateauShatto (Los Angeles and Paris International), and Blum & Poe (Los Angeles, New York, as well as Frieze masters: Monsters of the World, Unite!). Her recent artist’s books include The Case of The Ascetic Satyr, with Asger Jorn (JdJ/DAP, 2015), and Potato Blues: A Psycho-Geography of Potatoes (Onestar Press, 2016).

Ellef Prestsæter is a founding member of the art and research group the Scandinavian Institute for Computational Vandalism and a PhD fellow in art history at the University of Oslo.

Tiziana Terranova is associate professor of cultural theory and new media studies at the University of Naples ‘L’Orientale’. Together with Celia Lury and Luciana Parisi she edited a special issue of Theory, Culture & Society on “Topologies of Culture” in 2012. She is the author of Network Culture: Politics for the Information Age (Pluto Press, 2004); and the forthcoming Hypersocial: Digital Networks between the Market and the Common.

These are Situationist Times is an exhibition, digitization and publication project by Elin Maria Olaussen & Karen Christine Tandberg (Torpedo Press) and Ellef Prestsæter, generously supported by the Norwegian Arts Council.

*Suggested reading:
Interview with Celia Lury, Luciana, and Parisi Tiziana Terranova on the “becoming topological of culture”.
Situationist Times #3, #4 and #5.