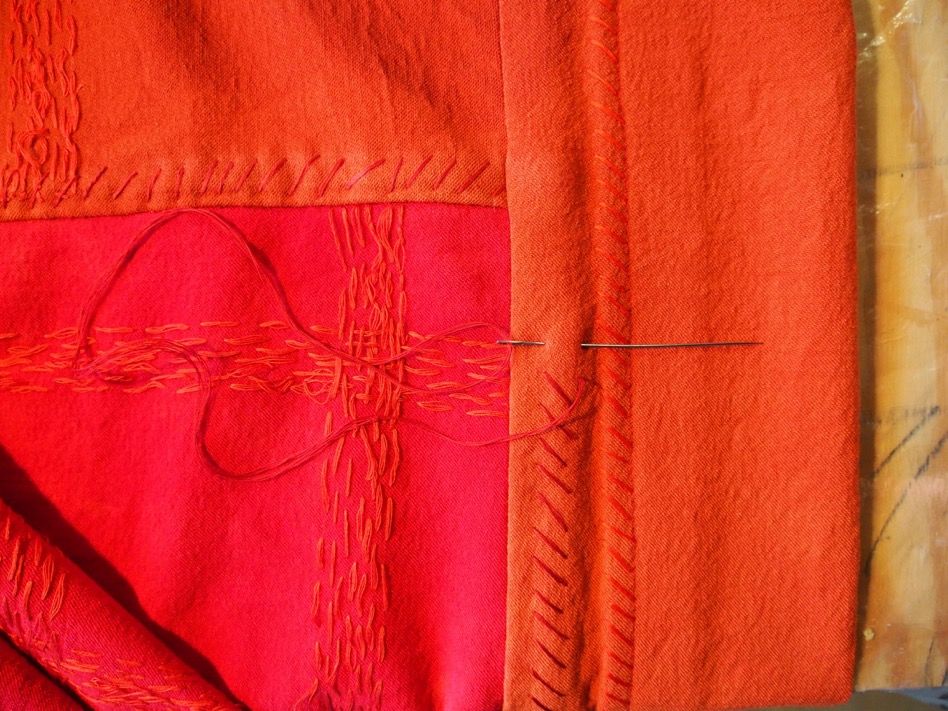 See pictures from the exhibition on Art Viewer

Kunsthall Oslo is pleased to announce Strid [Struggle], a solo exhibition of new work by Elisabeth Haarr, opening on 9th September in our new space on Rostockgata. Haarr (born 1945, Hamar, Norway) lives and works in Kristiansand. Strid is the first solo presentation of Haarr’s artwork in Oslo for forty years. Elisabeth Haarr will discuss her work in conversation with Kunsthall Oslo curator Elisabeth Byre during Oslo Art Weekend, 15th-16th October. A monograph on Elisabeth Haarr, with an interview by Lotte Konow Lund and photographs by Eline Mugaas, will be published by Torpedo Press in October.

About the exhibition
The exhibition takes its title, Strid (meaning struggle, discord, strife) from a five-metre-square banner, pieced together from hand-coloured red silk, which will hang in the street outside Kunsthall Oslo. In contrast to the gleaming new buildings around it, slowly but surely the fragile red flag will become damaged and torn by the wind and weather. Haarr made her first banner work, Chile, in 1973, and she has continued to work with the form ever since. Syriaforheng [Syria Curtain] (2013) refers to the sheets of fabric—formerly shop awnings, curtains, blankets—that residents of war-torn Syrian cities have strung between buildings to obscure the sightlines of snipers, and the banner-works Walk On (2013) and Bleak Blonde (2014) are riddled with bullet holes.

In the series Færdaminner [Travelogues], elements from the traditional Scandinavian rya combine with Haarr’s own history. In the works Dessau (2013) and Oh Gunta (2013), the journey being described is from the folk art of the boat-rya—traditionally hand-knotted by women whose seafaring husbands used them as protection against the elements—to the modernism of Bauhaus textile design. In Love is in the air (2012), Haarr plays with the idea that that quality of the materials used in a boat-rya established the owner’s status, with the knotted textile section of the work made from scraps of plastic bags and floral tablecloths.

Haarr has recently been working on a series of dresses, sculptural objects over two metres tall made of diverse materials including acrylic, silk, PVC and newsprint. “They are not intended as dresses to be worn, but as symbols of various aspects of women’s lives,” says Haarr. Titles like Venus, Torn and Last Waltz suggest an implicit feminist critique, and the works point to the restrictions that female roles have traditionally implied, as well as to hopes for future change.

About the artist
Elisabeth Haarr (born 1945) is considered one of Norway’s central and most influential textile artists. Her career as an artist, educator and activist spans five decades, and throughout this time she has worked for the recognition of textile art in the contemporary art field.

Haarr first exhibited at Kunsthall Oslo in 2013, in the group exhibition Hold stenhårdt fast på greia di—Norwegian art and feminism 1968–89, where she showed the Frustrasjonsteppe (1982), a tapestry woven from plastic bags, and the installation work Portrait of a trendsetter (1986), a giant “skirt” made from layers of brightly-coloured synthetic material that hangs above a mirrored floor. In different ways both works aimed to capture the spirit of their times, a recurring feature of Haarr’s diverse production.

Elisabeth Haarr’s practice encompasses many different kinds of commitment, strongly shaped by the decades she has been active. From the 1970s campaign against the EU, through support for anti-imperialist struggles and the Solidarity movement of the 1980s, to identity politics, feminism, and the critique of power. Haarr’s politics is expressed through aesthetic, formal and material contradictions in her work. In her early abstract tapestries from the late 1960s she began experimenting with synthetic thread that contrasted with the traditional wool. In the 1970s she explored silkscreen, poster production and collage work. In the 1980s, she began to embroider and explore materials such as plastic, wire and acrylic.

A common denominator in Haarr’s production is a thorough knowledge of traditional textile work. Haarr has a strong awareness of traditionally female handicraft, the shared knowledge and practise that was part of day to day survival. She says: “Contemporary textile art arises directly out of the general folk art, which was made by women. This specialized knowledge is one of the legs that our culture stands on. It has been the core of my artistic practice and remains so in this exhibition.” The legacy of the Swedish-Norwegian artist Hannah Ryggen (1894–1970) and her tapestries is also strong within Haarr’s oeuvre; in 2008 the Museum of Decorative Arts in Trondheim presented works by Haarr and Ryggen side by side.

Elisabeth Haarr was born in 1945 in Hamar. After twenty years in Askvoll Sunnfjord she moved in 2003 to Kristiansand, where she lives and works. She graduated from the Norwegian National Academy of Craft and Art Industry (1963–1967), and has worked at the West Norway Art Academy in Bergen and at Sogn og Fjordane University College. She had her first solo exhibition in 1973 at Oslo Kunstforening, and has since exhibited at UKS (Oslo), Bergen Kunstforening, Nordenfjellske Kunstindustrimuseum, Galleri F15 (Moss), Stavanger Kunstforening, Christiandsands Kunstforening and others. Haarr has participated in the recent group exhibitions Shadow of War at Kunstnernes hus, Oslo and Forbannad vara du at Kunstnerforbundet in 2015, Unwoven World: Beyond the Pliable Plane at OCA, Oslo, in 2014, and Hold stenhårdt fast på greia di, at Kunsthall Oslo in 2013 and Kunsthall Stavanger in 2014.

Haarr’s work is represented in the collections of the Nordenfjellske Museum, Sogn og Fjordane Museum, the University of Tromsø, and the Norwegian Craft Foundation. In 2014 she was awarded the Rune Brynestad Memorial Grant for her artistic work and dedication.